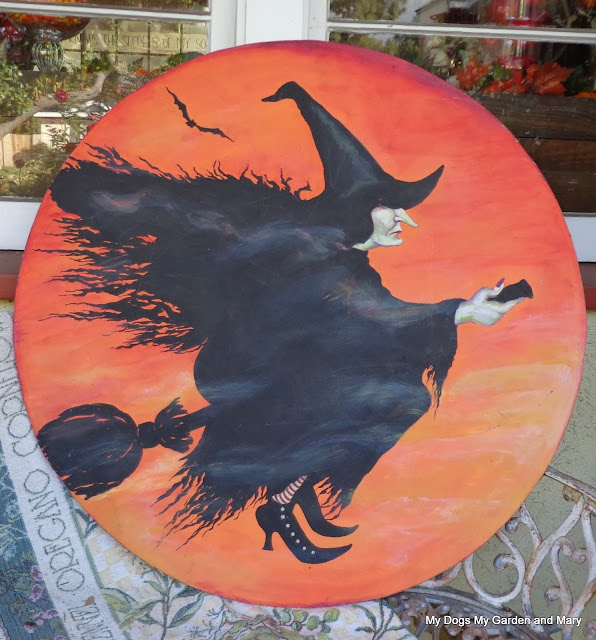 Don't you just love this picture on my Halloween front porch.  My artist friend Teryl painted this for me many many years ago from a picture in a magazine.  We got a piece of plywood - had it cut and she started her magic.  I put this on the front porch sitting on my little bench. 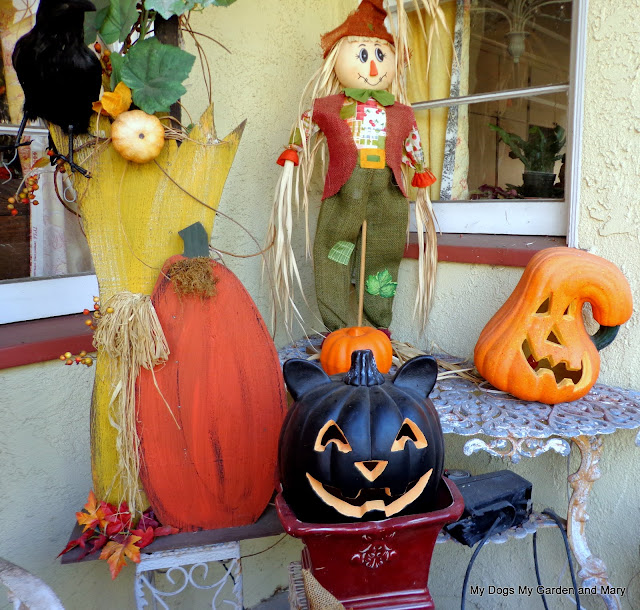 Some of my scary pumpkins along with my scarecrow. The scarecrow is from Walmart this year and the pumpkins from various places over the years.  I mix in real ones in with my ones that I keep. 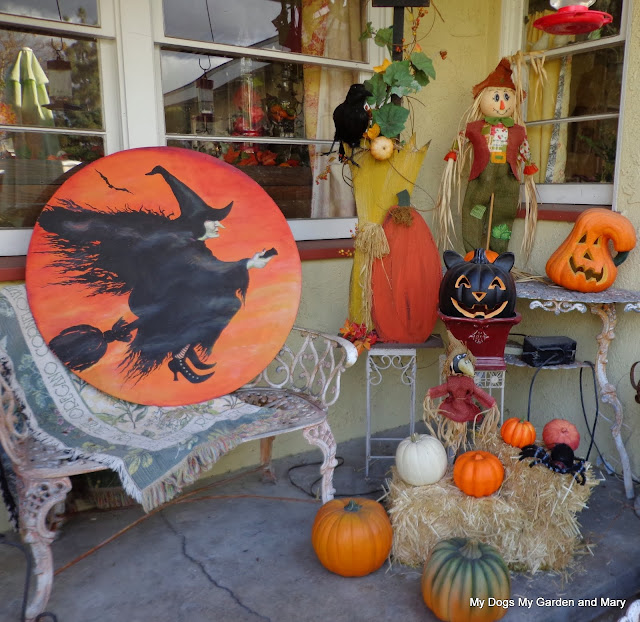 Sorry about the timer sitting on the shelf of the table - forgot all about it.  The big Black Kitty Pumpkin looks like he is smiling, doesn't he. 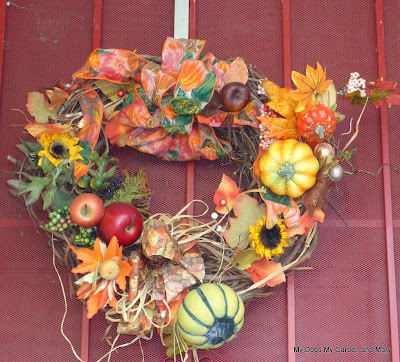 This is my fall wreath - didn't get a chance to make it scary as I had some medical problems and had to take it easy, which is hard for me to do. 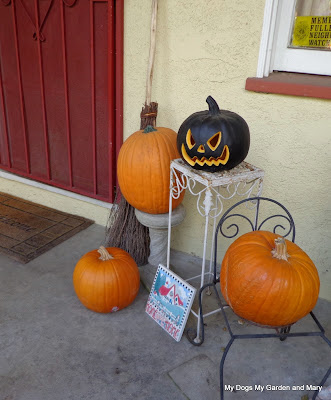 Some more pumpkins by the from door.  Do you see Broomzella's broom there - she flew in on that. That Black Cat looks so mean - hope he doesn't scare the little ones away. 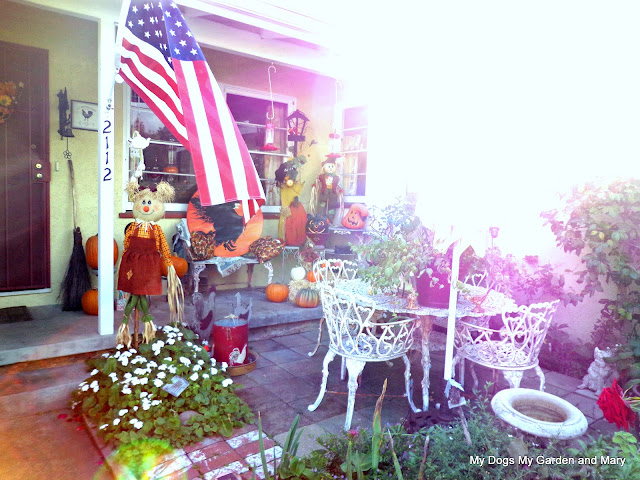 It was a beautiful day yesterday and the sun was so bright.  I just couldn't get the glare out of the picture, but this gives you an idea of my Broomzella's porch 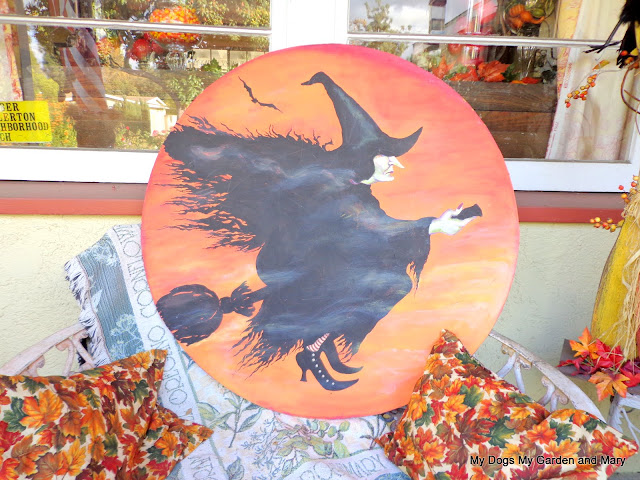 Well Broomzella said to say Happy Halloween to all and to all a good night - be careful Trick or Treating.

I hope you have enjoyed this post with my little friend Broomzella, said she would see you all next year.

Hope you will leave a comment as I love reading them all.

Posted by Mary@mydogsmygardenandmary at 5:23 PM 20 comments: 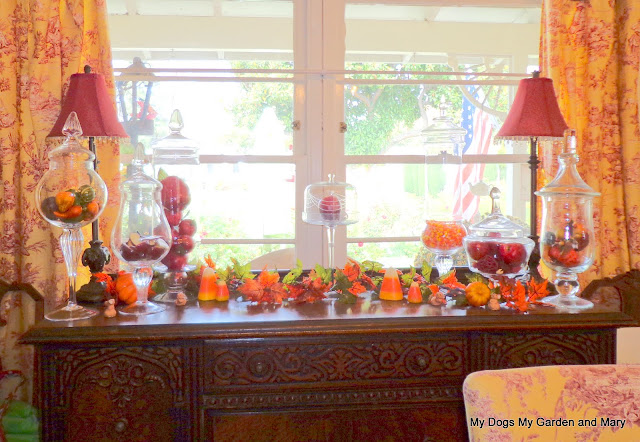 This is my Dining Room table decorations, just something simple.  I have had this horn of plenty for over 15 years.  When I was a Meeting Planner for a large corporation, the Hyatt Hotel invited me to a Chef's table luncheon in November.  This was held in the kitchen and there were about 40 of their best customers there.  The chef prepared our food as we watched.  All of the tables had this beautiful fall arrangement in the horn of plenty.  I won one and the real flowers stayed nice until after Thanksgiving.  So every year I bring it out and it brings out such wonderful memories of times past. I put lots of pumpkins and gourds in it making a lovely arrangement.  By the way the food was to die for - very very yummy. 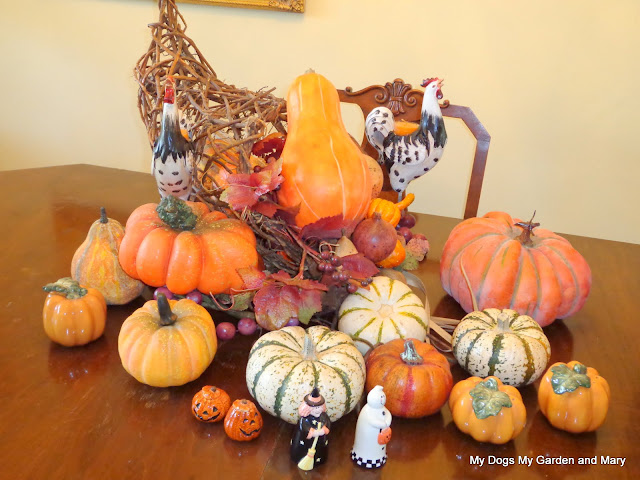 Some of the pumpkins are real and the rest are from years past.  Love the little pumpkin and ghost/witch salt and pepper shakers 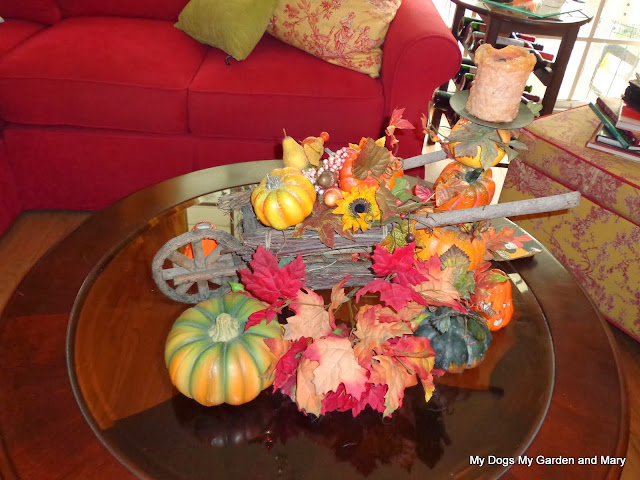 Just a little decoration for the coffee table using my little branch wheel barrel.  Will change it out depending on the season and move it from place to place. 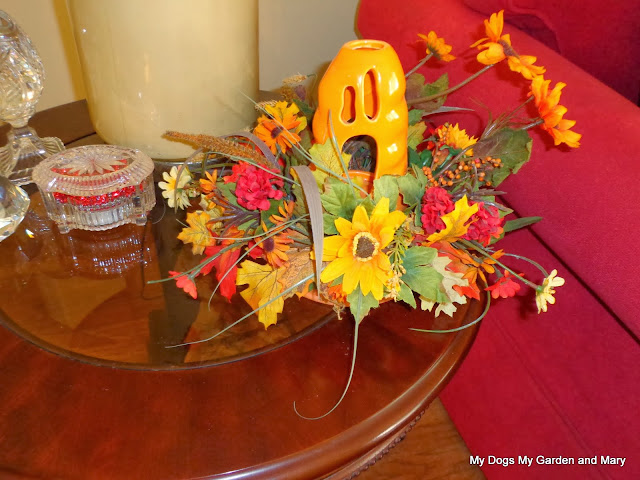 A scary Booooooo pumpkin arrangement purchase three years ago from Michael's after Halloween. 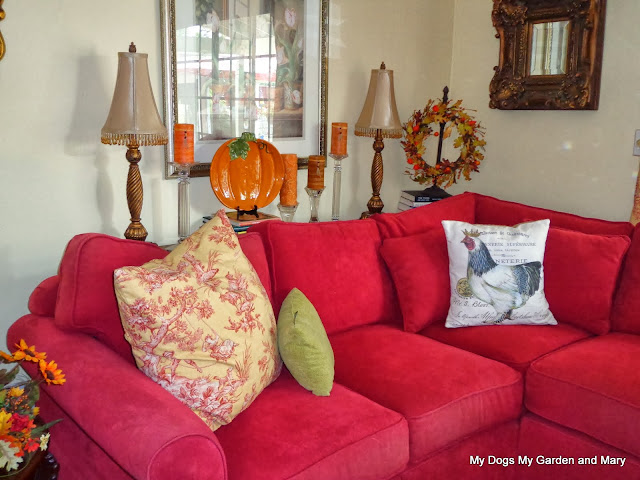 Just a few fall candles, big pumpkin plate from Walmart a few years ago and a little wreath on my sofa table. 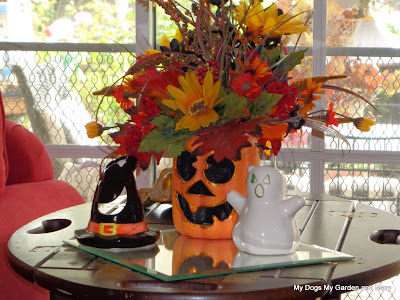 Another scary pumpkin arrangement from Michael's.  I love the little ghost and witch's hat.  They will hold tea candles in them. 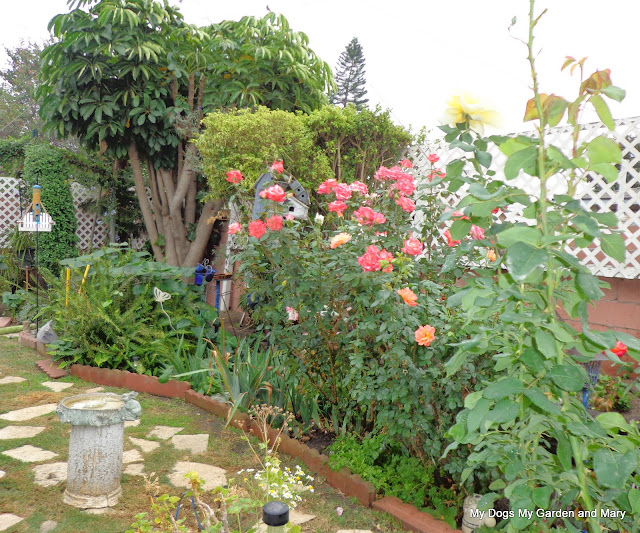 Wanted to show you some of my roses.  They are going crazy - full of blooms.  I have never had this many so late in the season.  We will have blooms all year until they are pruned way back in January.  I am going to try something different this year.  I am going to give them a heavy dead head and not prune them close to the ground, because we do not have cold winters like back east and they will not freeze. 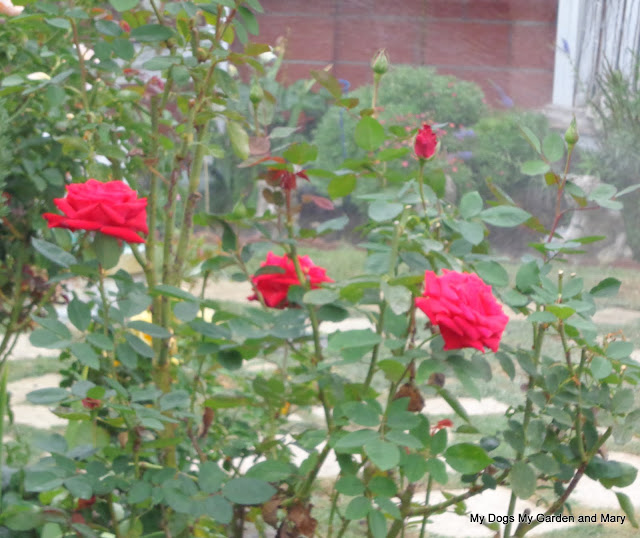 This rose is one of my favorites.  I don't know the name but it came from the Ninety Nine Cent store and it really performs. 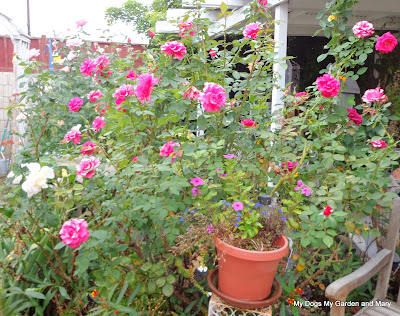 Lots and lots of roses on this bush. I was on a test program with Jackson and Perkins and they sent 4 rose bushes to plant and let them know how they performed.  I never knew the name of this one or if they produced it.  It's a lovely color with just a little perfume. 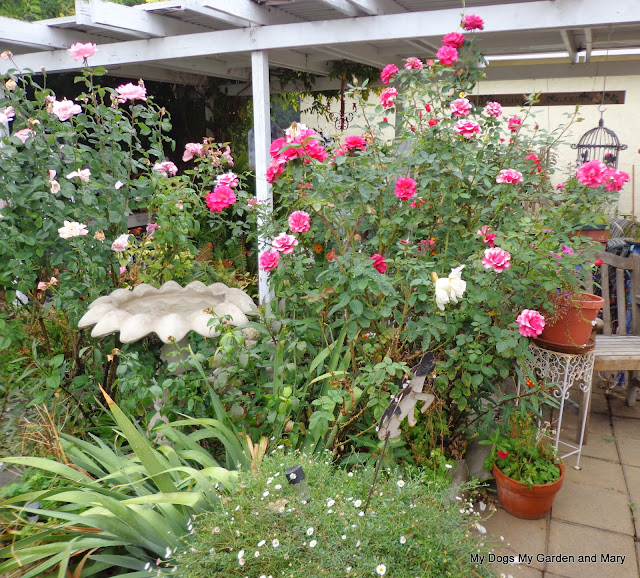 I can't keep up with dead heading the roses.  I would have thought that they would have slowed down some this fall but, no such luck. 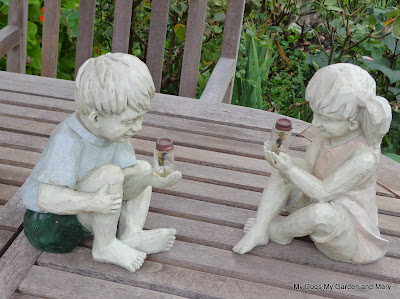 Aren't they just the cutest.  At night the little jars light up with a fire fly in them.  My friend Phyllis from Around the House gave them to me for my B day. 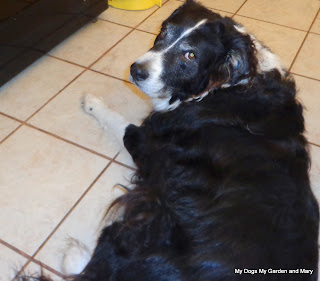 And of course my garden helper Waldo.  He is always with me where ever I go in the garden or house always keeping an eye on me

Thanks so much for stopping by.  Hope you leave a comment as I love to read all of them.

Hope that you have a BOOOOOOOOOOO Halloween.

Posted by Mary@mydogsmygardenandmary at 3:47 PM 22 comments: