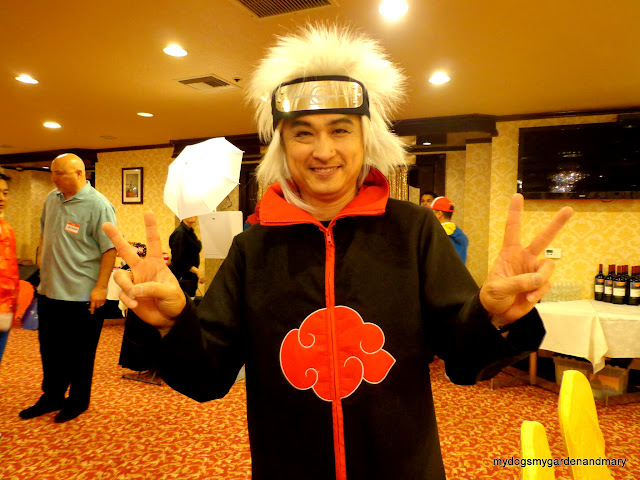 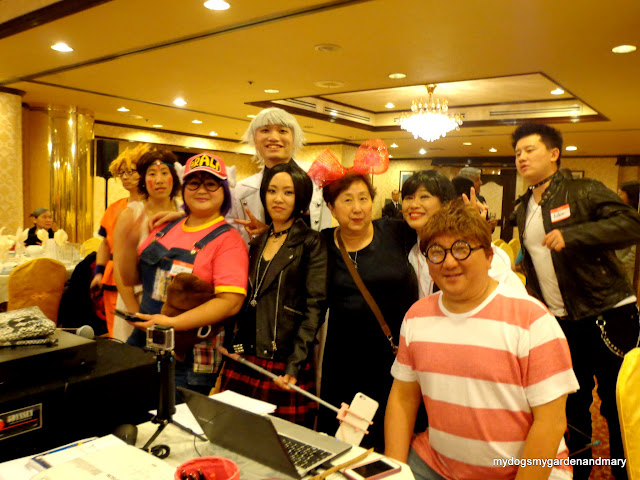 Chinese New Year party - let me tell you what a amazing evening I had at this terrific party.  I had so much fun - the 7 course meal was out of this world - entertainment was unbelievable.

I was invited to this party by Tour America.  This was one of my biggest accounts when I was Director of Sales at the hotel.  I get invited every year by the owner, Gloria Lam.  This lady is a very gracious woman and her employees truly love her.

The banquet room was beautifully set with tables of 10 guests with gold chair covers.  There was a very large lazy susan in the center of the table to hold the food.  We were given a saki shot for good luck in 2016, which is one of their customs.  We toasted and then came in two very large dragons.  We were each given a red envelope with money in it to feed the dragon, again for good luck.  The dragons went around the tables gathering their red envelops in their mouths. They danced around and played like they were fighting. 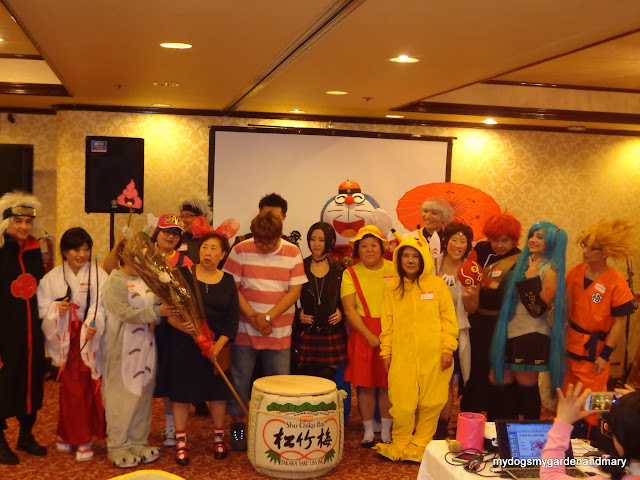 Gloria opening the Saki with her employees. 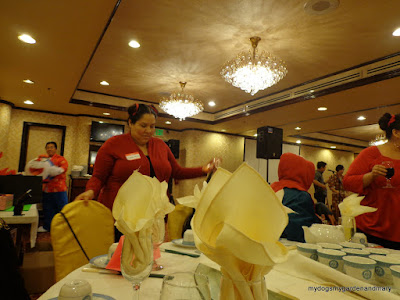 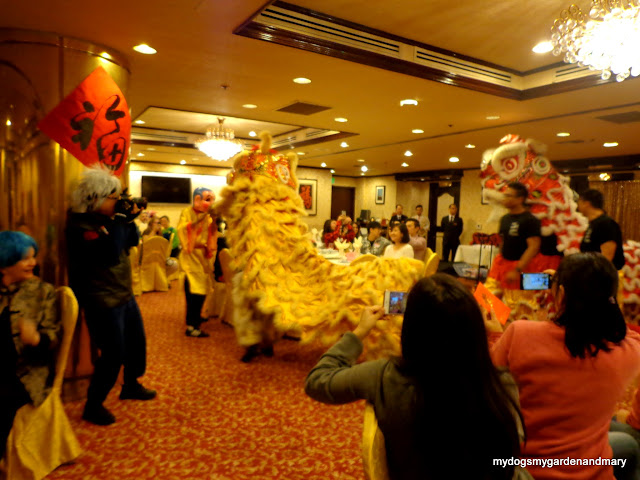 Dragons dancing around the room looking for red envelops

One of the guests feeding a red envelope to the dragon 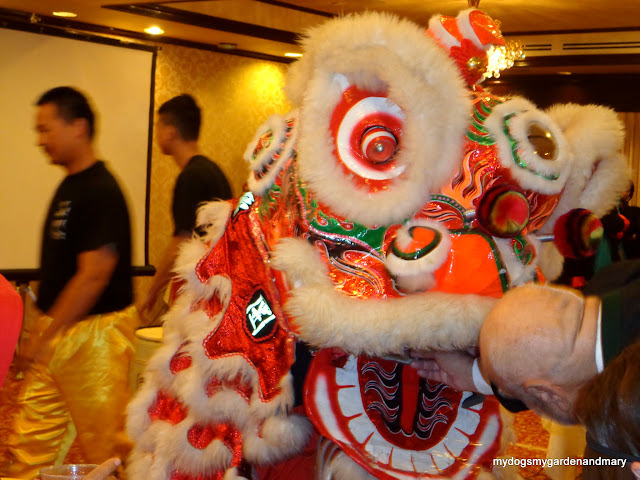 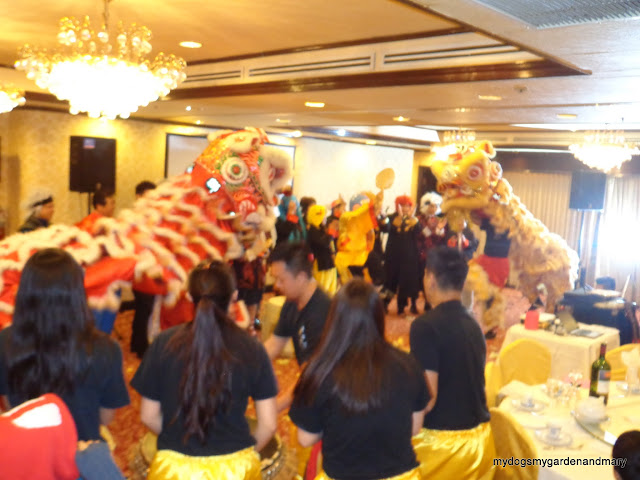 A very large salad was placed on each table and we had to toss it high to bring more good luck.  The salad had fresh salmon along with lettuce, etc.  Yum yum  Then the food started coming, one dish at a time.  I cannot begin to tell you what marvelous food we had.  Honey Walnut Shrimp, platters of Crab, Shrimp and Lobsters.  A dish of Scallops with vegetables,  Sweet and Sour Fish, Peking Duck with a small bread & plum sauce.  Rice with Shrimp and Vegetables, a Beef dish that was so good.  Shark Fin Soup and Mango pudding.  This took over two hours to eat along with the entertainment they provided.  Wine, hot tea and Saki flowed freely.  They had this big barrel of Saki from Japan with gold flakes in it - again good luck. 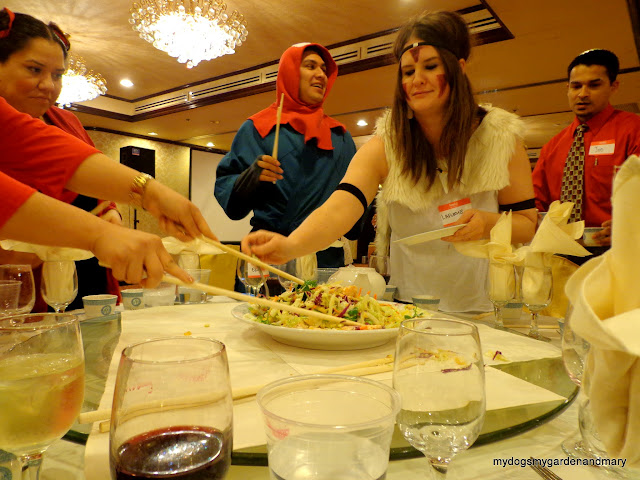 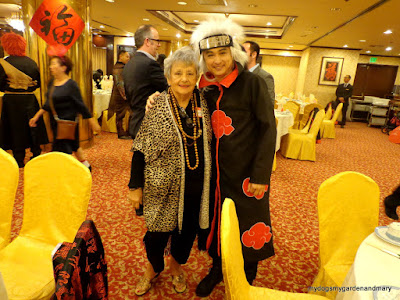 Here I am with one of the employees from Tour America

Each person was then given their own Red Envelope with a new one Dollar Bill in it, again for good luck.  Numerous door prizes where given away.

Then they had a Sumo Wrestling contest.  You would put on a suit and it would inflate making you look just  like a Sumo wrestler.  I laughed so hard at all the contestants trying to stay on their feet. 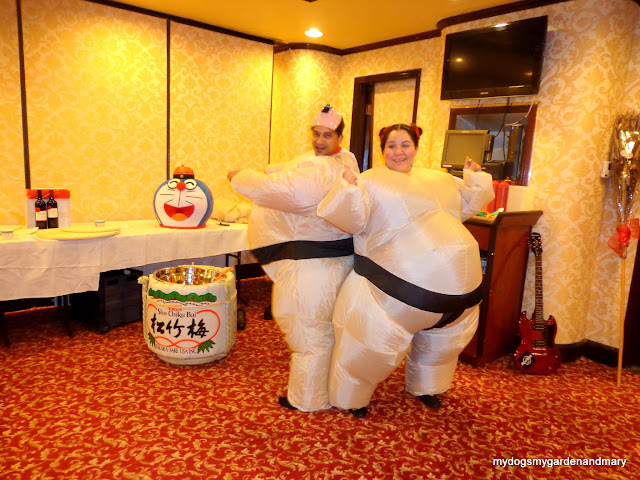 Sumo Wrestlers having some fun.

Each year they pick a theme and this year they were all dressed up like Chinese Cartoon Characters.  Pokieman, Kiki and the Delivery Man, etc.  they were priceless and they encouraged the customers to dress up also.  So we voted on the best - so much fun.......  Some of costume's were really good and a lot of thought went into making them,  of course a lot were rentals. 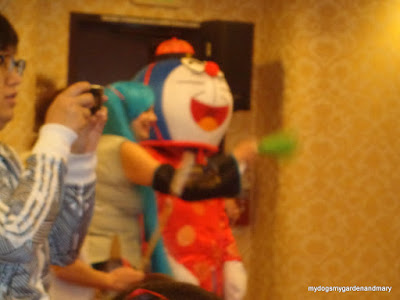 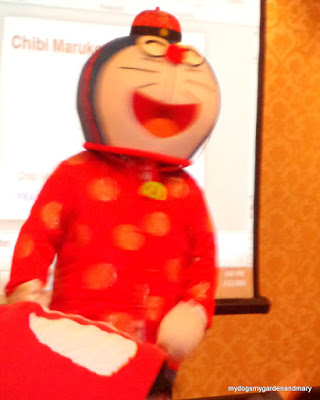 Gloria has as much fun as her employees were.  Such gracious people.
I feel so honored to be invited every year, even though I am retired.  Gloria said to me -" I expect to see you here every year." 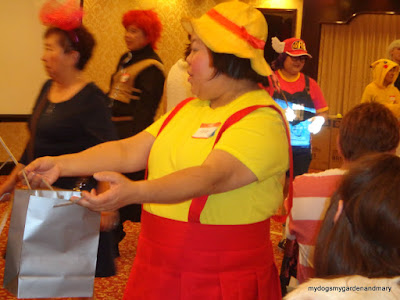 Kiki and the Delivery Man  That is Kik's  husband and I didn't know him all dressed up, such a good sport 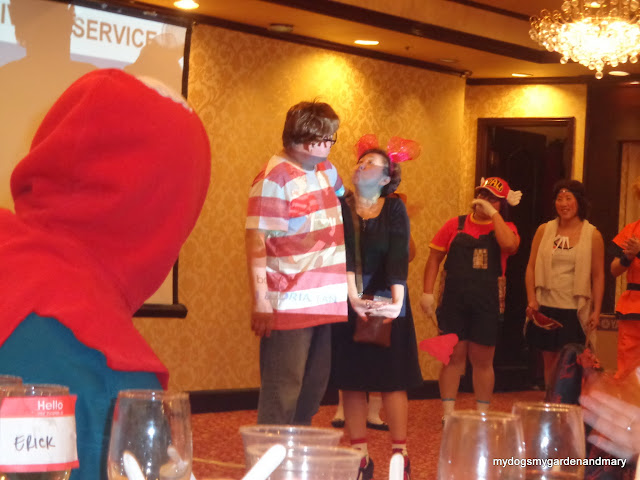 A wonderful evening was had by all.

I hope you have enjoyed this post on a Chinese New Year's Party. I really had a terrific time. So much good luck was passed around.  I look forward to this wonderful party every year.

If you have the good fortune to be invited to A Chinese New Year's Party, please go, you will not be disappointed.

Thanks so much for stopping by and leaving a comment.  Waldo, Lili and I like to read them all together.


Dwellings ~ Amaze Me Monday
The Dedicated House ~ Make it Pretty Monday
Between Naps On The Porch ~ Metamorphosis Monday
A Stroll Thru Life ~ Inspire Me Tuesday
Confessions of a Plate Addict ~ The Scoop
Coastal Charm ~ Nifty Thrifty Tuesday
Savvy Southern Style ~ Wow Us Wednesday
Ivy and Elephants ~ What's It Wednesday
No Minimalist Here ~ Open House Party Thursdays
Between Naps on the Porch - Tablescape Thursday
Have a Daily Cup of Mrs. Olson ~ Share Your Cup Thursday
My Turn for Us ~ Freedom Fridays Blog Hop
Common Ground ~ Be Inspired Friday
The Thrifty Groove ~ Thrifty Things Friday

Posted by Mary@mydogsmygardenandmary at 3:33 PM 56 comments: